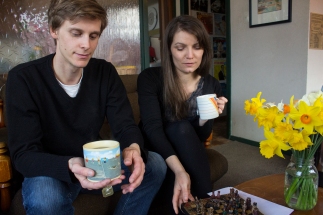 As you may or may not know, a Grawlix is a ‘a spiral-shaped graphic used to indicate swearing in comic strips’, whereas Grawlixes are a Wellington-by-way-of-Dunedin indie-folk band intent on inserting themselves into your brain with their intelligent, infectious songs about relationships and not being invited to parties. Continuing the great lineage of artists who bring sadness to their sprightly melodies, Grawlixes’s music often deals in the melancholy with self-deprecating honesty and beautiful boy-girl harmonies, sung by co-founders Robin Cederman and Penelope Esplin.
A recent signee to Home Alone records, following an extensive European tour supporting now label-mates French for Rabbits, Grawlixes debut album ‘Set Free’ is now available as of July 2017 from ITunes and Bandcamp.

You can find out more about the band here: